"I think the biggest source of inspiration are the stories, and the telling of the story, which the music can support in all kinds of different ways."

If you take a look at Paul Haslinger‘s catalog of work, one word comes to mind: prolific. From flagship games like Rainbow Six: Siege to premier television shows like AMC’s Halt and Catch Fire soundtrack, to big Hollywood thriller franchises like the Death Race and Underworld films, Paul has scored a plethora of projects across multiple media platforms. We got to talk with him about his start in composing for media, his biggest influences, and his thoughts on scoring thrillers:

When I was about 7 years old, I started ‘restructuring’ my family’s piano-keys with nail-polish, because I did not like the way the keys were arranged. I guess this was the start of my obsession about putting things together in a different way, which to this day informs my compositional approach, less the nail-polish.

There are usually a series of coincidences leading to this point, but my first big film in the US, Underworld (2003), happened as a result of a demo I had submitted. Fortunately for me, both the director, Len Wiseman, and producer Richard Wright, wanted a non-traditional approach but with a large cinematic sound, and apparently my material was the closest to what they were envisioning for the film.

I listen to a lot of music, constantly… occupational habit, I guess. It’s interesting to me how our perception of music shifts during our lifetime. Things that seemed boring a while ago, all of a sudden unlock themselves. It’s a fascinating process. For example, I only recently realized how much my upbringing in Austria has laid a foundation for my musical preferences. Which lead me to rediscover the group of classical composers whose music I grew up with, but never particularly appreciated: Mozart, Schubert, Bruckner, Mahler.

Every story needs an original spark… that can be a sound, an idea, an inspiration that occurs due to something that happens to me, a story I’ve been told, but there needs to be that moment where I go “wait a second, what if I did this?”

Not really. I am never short of ideas. I just find out with a majority of them, they will not survive prolonged scrutiny. But in that first moment, they all seem fabulous! 😉

As someone who’s scored marquee video games, peak TV shows, and big feature films – does your approach differ depending on the type of media you’re scoring?

Yes and no. There are differences you need to be aware of, just like there is a difference if you are playing live in a small club or an outdoor arena. You have to adapt your arrangement to your circumstances. But the core of the piece, the musical quality, applies across all platforms. If it’s a cool piece, it will play better in any circumstances.

As a composer, you’ve gotten to work on quite a few thrillers – what about scoring these horror/thriller types of films is exciting to you? Have you always been a fan of the genre?

Not really. I am always appreciative when someone gives me a gig and try to make the best of whichever form or genre I happen to be working in. I typically have some ideas how things could be done differently, so there is never a shortage of incentive. I think the biggest source of inspiration are the stories, and the telling of the story, which the music can support in all kinds of different ways.

My setup is centered around a Cubase10/Win10 system. This is the hub that everything else is connected to. For audio AD/DA is am using BURL converters.

On the software side, using a lot of UAD, FabFilter, PSP and Soundtoys plugs. With libraries, sticking to Heavyocity (of course;) VSL, Orchestral Tools, 8dio, Spitfire, Arturia, NI, U-He, Omnisphere.

Hardware: Arturia controllers and MatrixBrute, NonlinearLabs C15 and an arsenal of vintage boxes I keep around for good company (ARP, Oberheim, Moog)

Probably a ‘prepared synth’… with a range of expression controls custom fitted to my playing and programming style.

They are part of most of my writing templates. With all of the Heavyocity instruments, they are made by people who use this stuff on a daily basis. So the implementation is typically easier and faster, and it’s pretty close in sound to what I would actually mix. They serve heaps of inspiration and when you are on a tight deadline, these instruments are some of the best friends you can have!

Check out Paul’s full list of credits and upcoming projects at: https://www.imdb.com/name/nm0368248 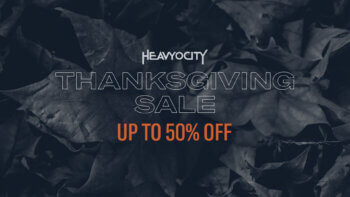